One criticism levelled at homeopathy is that the remedies are so diluted that there is little chance of there even being a single molecule of the starting material left in the final remedy. Critics of homeopathic remedies will often claim that they can't possibly work because they contain no active ingredients.

Why do homeopaths dilute their remedies?

When Samuel Hahnemann was developing homeopathy over two centuries ago, many of the ingredients he tested were poisonous, as indeed are many ingredients used in homeopathy today. In order to overcome this toxicity he started diluting his remedies before giving them to patients. What he thought that he'd discovered was that not only do the remedies still work when they are diluted but that they work better the more diluted they are. This led to the development of the serial dilution of his remedies.

It is not merely dilution that homeopaths claim that makes their remedies increasingly stronger with each dilution however, it is the process known as potentisation that is performed between each dilution that it's claimed does that. The intermediate remedy is vigorously shaken (known as succussion) between dilutions to transfer the essence of the remedy to the water. It is potentisation that is meant to preserve and amplify the healing properties of the original remedy whilst dilution removes its toxicity.

How is serial dilution done?

The standard way of preparing homeopathic remedies uses a process of serial dilution. This was the method originally developed by Hahnemann. Although there is another process used commercially for extremely high dilutions, the basic underlying principle is the same.

When a remedy is first prepared, it is dissolved in alcohol or water and this is known as the 'mother tincture'. This is then serially diluted usually by either 1 part in 10 (X potencies) or 1 part in 100 (C potencies). The following example uses C potencies for illustration, but the process is identical for both. If we start with 1,000mL of remedy, then 10mL would be taken from it and added to 990mL of water. This is repeated serially and each dilution is meant to make the remedy stronger (more potent). 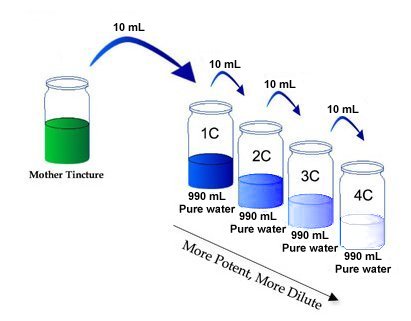 In chemistry we use a measure known as a "mole" which is simply the molecular weight of a substance in grams. The convenience of using moles is that no matter what the substance is, one mole always contains the same number of atoms or molecules: 6.022x1023 [*] (Avogadro's number).

As an example, let's consider the compound Sodium Chloride (common salt). The molecular weight of Sodium Chloride (NaCl) is 58.44, therefore 58.44 grams of NaCl is one mole which contains 6.022x1023 molecules.

Now that we know how many molecules we have in the starting solution, it's just a case of keeping track of the numbers as we serially dilute it.

In "C" potencies, there is a dilution of 1 in 100 at each step. That means that out of our 1 litre (1000mL) starting solution we take 10mL and dissolve it in another 990mL of water. This means that the number of molecules present reduces by a factor of 100 at each step.

And so on with the number of molecules present reducing by a factor of 100 (or 102) with each step.

Once we pass this dilution point, known as the Avogadro limit, there is no more starting material in the solution. Any dilution beyond 12C (or 24X) simply means that water is being dissolved in more water. This is why homeopathic remedies that have potencies over 12C do not contain even a single molecule of active ingredient.

The calculations have been done based on a starting solution that is a standardized 1 molar solution. In reality, homeopaths are unlikely to be starting with a 1 molar solution, especially with the more expensive materials they may use. This means that the point of diluting out all of the starting material may well be reached before the 12C dilution.

What about homeopathic remedies that are less than 12C?

The least diluted homeopathic remedies come in a potency of 3C. This means that there may well be some of the starting material present in the final remedy.

3C potencies are diluted to 1 part in a million (diluted by 1 in 100 three times). To get this in perspective, if we take a standard medicine spoon (5 mL) we would have to dissolve this in 4,999,995 mL of water to achieve a 3C equivalent dilution. That's the same as dissolving 1 spoonful of medicine in 26 standard-sized baths full of water!

This water would then be sprayed on to sugar pills and allowed to evaporate. It is questionable whether the best micro-analytical methods could detect the amount of remedy molecules present on the pills, never mind whether they will have a physiological effect.

Methods used in chemistry confirm that homeopathic remedies contain only trace amounts of ingredients or none at all. From a rational, scientific point of view this is important as everything we know about how drugs work conventionally (dose-response studies, for example) means that homeopathy cannot work. It is not possible to dilute a substance out of existence and still expect it to have a physiological effect.

The extreme dilution used in homeopathy, particularly above 12C where the remedies contain no ingredients at all, is sufficient to invalidate homeopathy from a scientific perspective. Most claims made by homeopaths, however, are based on magical thinking rather than scientific principles, so the reality of ingredient-free remedies is explained away by invoking ideas such as water having a 'memory' which enables it to remember the properties of things that were once dissolved in it.

Homeopaths claim that it is potentisation that makes their remedies work - not simply the dilution - and the lack of any molecules in their remedies does not invalidate the claims made for potentisation. This propensity for magical thinking is why this scientific invalidation will have little to no impact on the belief in homeopathy.

* scientific notation. This is a shorthand way of representing large numbers.

The power to which 10 is raised, i.e. 10x, indicates how many places there are after the first figure - the blanks are filled in with zeros.