There's little doubt that hauntings occur: people do have experiences that they perceive as paranormal in nature. The question is whether they are truly paranormal or have a natural explanation. 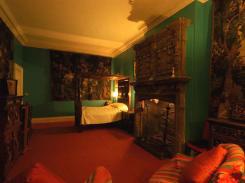 There are many reasons why a particular location gives rise to haunt reports. These include: suggestibility; prior knowledge; contextual factors present in the environment (age, décor); ambience (lighting, draughtiness); and various physical properties. One factor identified in recent studies is that of magnetic fields, which have been postulated as a possible cause of some haunt-type experiences.

Such explanations are usually difficult to examine empirically as they happen to people at random; however, if a haunted location could be identified, an empirical study of the environment could be undertaken. One such place is the tapestry room in Muncaster Castle, Cumbria.

What makes a location haunted?

A location can be said to be haunted if numerous reports of anomalous experiences occur independently in the same location which are interpreted as ghostly. NOTE: this doesn’t necessarily imply ghosts (as actual entities) being present although that is a common interpretation.

It is known that people who have complex partial seizures, usually as a consequence of having Temporal Lobe Epilepsy (TLE), also report aura and hallucinatory experiences (including paranormal and spiritual experiences). This type of seizure does not result in a complete loss of consciousness - more an embellishment of it. Symptoms of a seizure include: hallucinatory experiences (visual, olfactory and aural); feelings of déjà vu or jamais vu; visual distortions (objects appearing to be different in size, shape or distance than they really are); a feeling of detachment from oneself or reality; feelings of deep meaningfulness; and a heightened sense of fear and anxiety.

Magnetic stimulation to the brain, usually to the right temporal lobe, is thought to induce ‘micro-seizures’ in the brain that are similar to TLE. If the person’s brain is susceptible to magnetic stimulation (20-40% of people tested) then such stimulation can invoke similar experiences to those with TLE, i.e. possible hallucinatory experiences and peculiar sensations. There is some laboratory evidence that low-amplitude, complex magnetic fields can indeed induce similar experiences to TLE (see particularly the work of Michael Persinger). Although controversial, the emerging picture from Persinger's lab is that striking experiences can be induced in highly vulnerable brains under certain circumstances.

In a recent critique of the field, Braithwaite (2008) noted that it is unlikely that such magnetic fields are common in cases of haunting; and in addition, even if such fields are present it is important to acknowledge the co-presence of other factors such as context and the need for a susceptible brain. These factors, working in concert, may underlie some of the more striking and sustained reports reported by witnesses. For example, someone sitting next to a malfunctioning electric fan that is giving out unusual magnetic fields and who is experiencing unusual sensations will interpret them differently if they are in a railway waiting room from sitting alone in a reputedly haunted castle!

This means that if a person who has a brain that is susceptible to magnetic stimulation is in an environment where such stimulation occurs and the context of their location is conducive to paranormal type interpretations then we could have an explanation for at least some hauntings. These ideas are attractive as they are testable, thus falsifiable.

One location that can truly be said to be haunted (given the definition in the intro) is the Tapestry Room in Muncaster Castle. People who have stayed in the room have made many haunting reports independently over many decades. Common experiences reported include: a sense of presence/being watched; fleeting apparitions; hearing voices; and above all, the sound of babies/children crying. 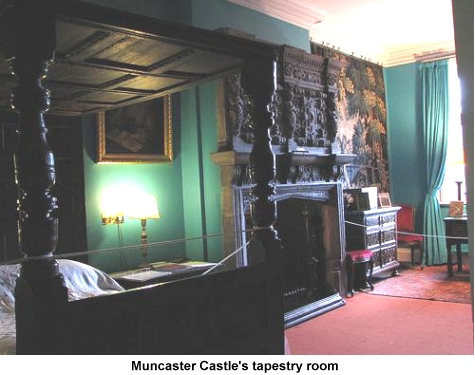 It is interesting to note that the particular wing that houses the tapestry room has never been used for the accommodation of children, thus ruling out actual children being heard, but the tapestry room was once used as a children’s nursery – a fact that augments the paranormal interpretation of hearing children crying!

In 2004, Dr. Jason Braithwaite and Maurice Townsend did a detailed field study of the tapestry room in Muncaster Castle[1] after having ascertained that there was a strong magnetic anomaly in the region of the bed in the room. The two main findings were that there is a large static magnetic field present in the bed frame and complex temporal distortions in the alternating magnetic field produced by the castle’s 3-phase mains system.

It is possible that when guests slept in the bed, small movements of their heads in the strong static magnetic field could mimic the effect of a complexly changing magnetic field being applied to a static head (as occurs in the lab).

This could lead to stimulation to the brains of sleeping guests produced by the low-amplitude, complexly changing magnetic fields inducing micro-seizures in the same way they occur in the lab. As the guests were staying in a medieval castle that has a reputation for being haunted, any resulting experiences could easily be given a paranormal interpretation.

Of course, there are a lot of other contextual factors too so why is the magnetic anomaly so important? Well, when doing research of this nature it is essential that a baseline measurement be taken somewhere else to act as a comparison.

As it happens, the very next room to the tapestry room (literally only a few feet away) is of a similar size and of similar décor yet there have been no haunting reports from this very similar room. The idea of using a baseline measurement is to look for differences between the two locations. Although there are some small differences between the two bedrooms, the one major difference is that in one room the bed is highly magnetized (and is the location of the haunting reports) and in the other one it isn’t. This makes the magnetized bed the one crucial difference between the haunted and the non-haunted locations.

We have some empirical laboratory evidence that magnetic stimulation to the brain can induce paranormal-type experiences; we have an excellent haunting (multiple, independent reports, etc.); we have a detailed, scientific investigation that produced empirical evidence for the magnetic anomaly exactly where the haunting reports originated; and we have an excellent baseline to control for other possible factors.

However, as good as that sounds, we also have to consider potential weaknesses in the case to avoid reaching a hasty conclusion. Although there is laboratory evidence for magnetic stimulation effects, it has not been reliably replicated by other researchers so a call has been made for independent, laboratory-based, double blind replications to be performed (Braithwaite, 2008)[2] to test that the effect is indeed real.

This is essential as there is also a problem with the mechanism: it is not clear how low-level magnetic fields could induce enough voltage/current in the brain to cause the neurons to fire and so result in a micro-seizure; however, it may well be the complexity of the field that is important rather than its amplitude and so the mechanism simply isn’t understood yet.

The role of magnetic fields with regard to haunt-type experiences is still not yet established. If better laboratory evidence is produced that confirms the effect then the research done at the Muncaster Castle tapestry room is a very strong candidate for a real world example of it. However, in the grand scheme of explaining anomalous experiences, magnetic anomalies as described here are not likely to account for more than a very small percentage of them.

Magnetic anomalies (or Experience Inducing Fields - EIFs) are theoretically plausible, empirically demonstrated in the lab (although not confirmed), and have ecological validity (occur in the ‘real world’ outside of the lab). Because of this, magnetic anomalies are worthy of further serious study. They may only account for a small percentage of cases but may well prove invaluable when researching haunted locations.